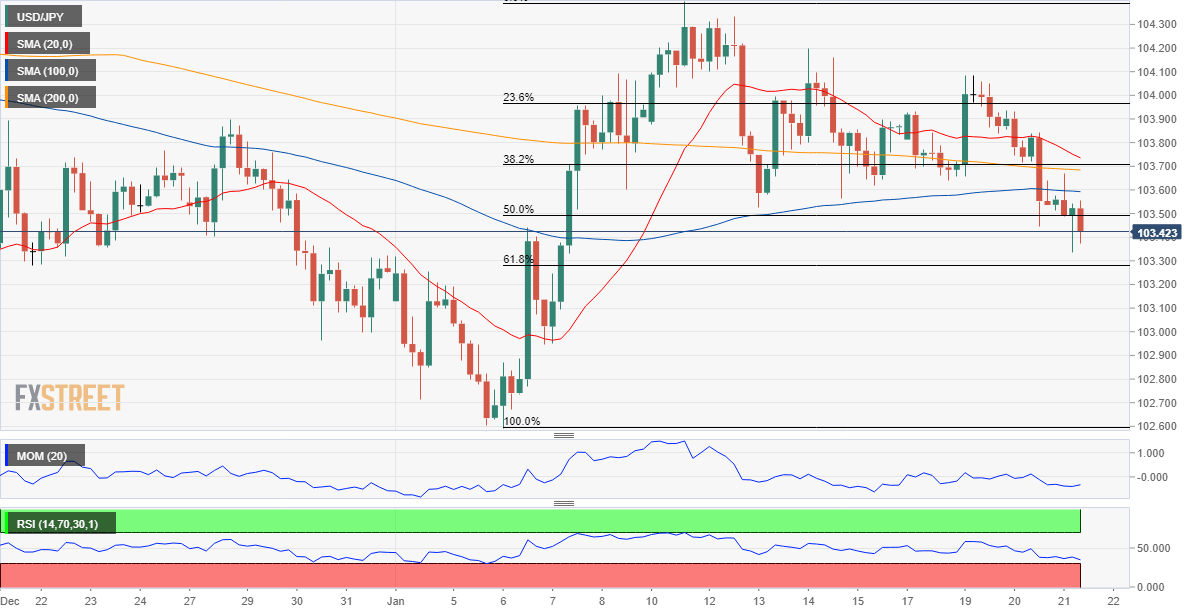 The USD/JPY pair extends its decline and trades near a daily low at 103.32. The dollar weakens across the board, as European stocks trim early gains and US Treasury yields ease. It was a quiet macroeconomic week so far, but things will hopefully turn lively during the upcoming hours, as the ECB will announce its latest decision on monetary policy.

The US will publish some housing-related data, and Initial Jobless Claims for the week ended January 15, foreseen at 910K from 965K in the previous month. The country will also release the January Philadelphia Fed Manufacturing Survey.

Earlier in the day, the Bank of Japan has announced its latest decision on monetary policy. As widely expected, policymakers maintained the current policy unchanged. However, they downwardly reviewed this fiscal year’s growth to -5.6% from -5.5%. Governor Haruhiko Kuroda later said that it too early to consider an exit from the ongoing “powerful” monetary stimulus.

The USD/JPY pair is technically bearish, trading below the 50% retracement of its January rally at 103.50, also a static resistance level. The 4-hour chart shows that the pair is below all of its moving averages, which anyway remain directionless and confined to a tight range. The Momentum indicator heads firmly lower within negative levels while the RSI consolidates near daily lows. The next Fibonacci support comes at 103.25, with higher chances of a bearish extension once below it.

View Live Chart for the USD/JPY

Ripple can hold the XRP up, but not against the market on selling mode

As stay-at-home trading booms, Tastytrade gets snapped up for $1 billion by U.K. broker