HELP ME CHOOSE START QUIZ
Home » Forex » Ripple can hold the XRP up, but not against the market on selling mode
Forex

Ripple can hold the XRP up, but not against the market on selling mode

The bullish reaction in the XRP/USD following the news of the nomination of Michael Barr, a former US Treasury official and once a key member of Ripple’s advisory board, as head of the
Office of the Comptroller of the Currency (OCC) has been short-lived.

Finally, the market is succumbing to the downward pressures and moving sharply lower, led by Bitcoin, which has broken the triangular figure downwards.

The impact on the XRP/USD pair is more critical, as SEC’s lawsuit against Ripple Ltd left the technical side of the XRP in a bad way.

The XRP/USD is currently trading at a price level of $0.285.

As we can see on the 4 H chart, XRP is losing the support of the short-term bullish trend line (A) and entering a clearly negative price segment of the chart.
Below the current price, the first support level is at $0.27, then the second at $0.241 and the third one at $0.205. 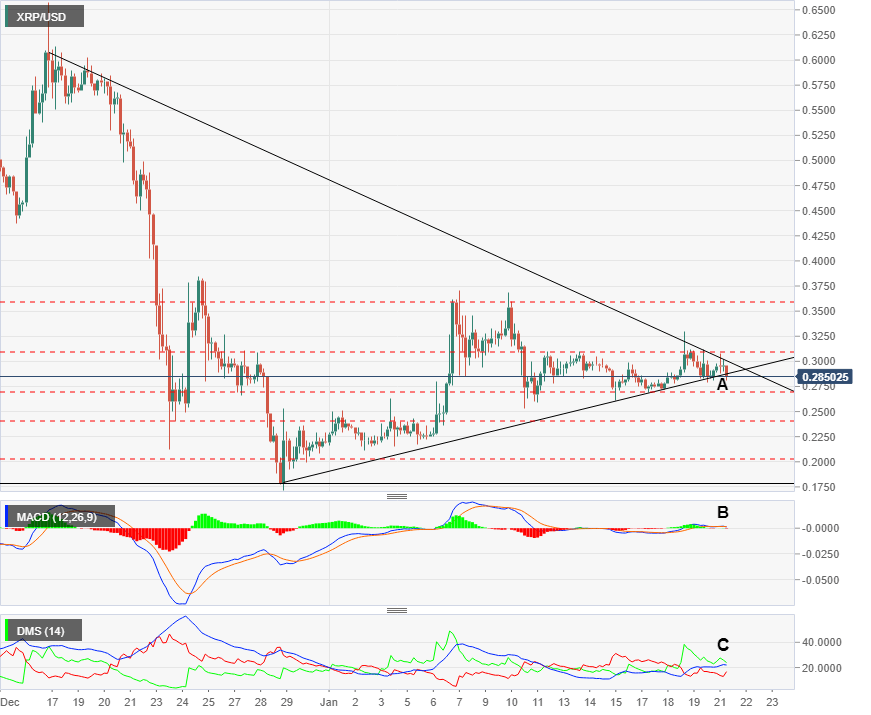 On the upside, technical indicators are giving hope of a sudden change in the situation, with a MACD (B) languishing just above the neutral level of the indicator and retaining a slight upward profile.
Looking at the Directional Movement System indicator (C), the bulls are still above the ADX line, indicating that the buying side is still in control. Bears are reacting to today’s fresh selling upside down, but are still far from disputing the bulls’ dominance.

Above the current price, the first resistance level is at $0.29, then the second at $0.30 and the third one at $0.3098.  Above these resistance levels, the XRP/USD pair could pick up strength and move higher if the rest of the crypto Top 3 – already back from its new all-time highs – allows it to do so.