Price Consolidates as European Equities Struggle to Keep Up

Get Your Free Equities Forecast

Whilst general market sentiment seems to be in favor of a risk-on move this week, European equities are struggling to keep up with positive momentum as the virus continues to be a significant risk factor. Germany has seen 1,734 coronavirus related deaths in the last 24 hours, its highest level since the start of the pandemic back in March, and Angela Merkel has managed to gain support to extend the national lockdown until February 14th in an attempt to bring down the numbers.

New cases of the virus have spiked across the continent after the Christmas holidays which has dampened the positive sentiment that had built up at the beginning of the year as the vaccine rollout started to pick up. On top of the actual threat of the virus, logistic issues with the distribution of the vaccine have made the vaccination rate much slower than initially expected, which drags on the perceived damaging effect of the virus on the economy, dragging down economic sentiment.

In Spain, the death rate has been fluctuating in the last few weeks, jumping back and forth from 400 to 250 since the beginning of November, lacing the country in a better position than some of its peers regarding this figure. But new infection rates continue to rise, leading to the belief that there will be a subsequent increase in the death rate, putting further pressure on an already struggling health system, which has lead most states to impose earlier curfews and more restrictive measures. 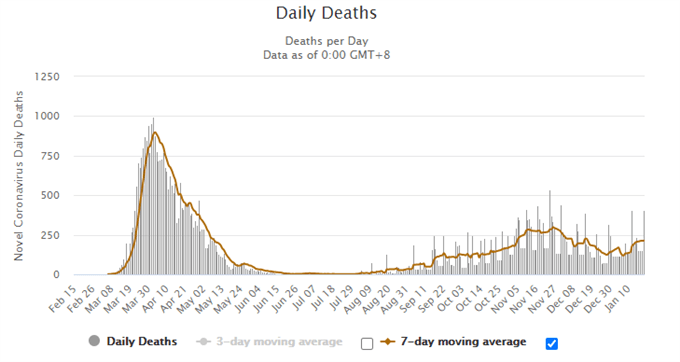 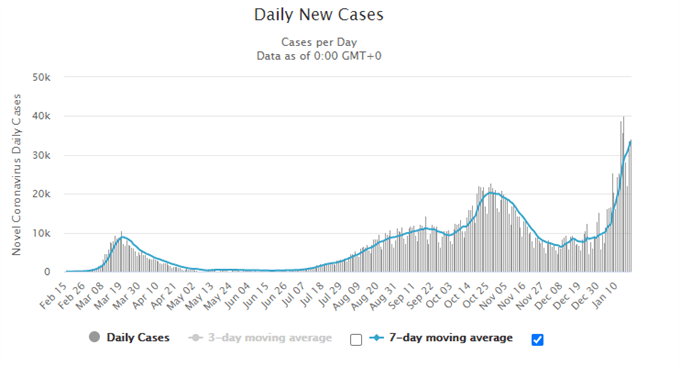 IBEX 35: As I mentioned in my last report, the IBEX 35 has been mostly consolidating in the past week, struggling to find a direction between two key Fibonacci levels. The 61.8% Fibonacci (8,450) has so far been the absolute top for the Spanish index since the drop seen in March, and is likely to remain so unless there is a significant push in bullish sentiment brought on from a risk event. To the downside, the 50% Fibonacci (7,946) is likely to continue offering strong support as the index looks for direction, although short-term support can be found at the 50-day simple moving average, which is trailing the current price and is now located at 8,183, the low of today’s session so far.

EUR: the euro is showing mixed signals across different pairs, although the general strength of the European currency has fallen since the ECB expressed concerns about current exchange rates back in December 2020. The ECB meeting is likely to be a non-event tomorrow as the Central Bank is likely to hold still and measure the progress of its last round of measure, as investors key an eye on inflation figures to try and gauge the state of the economic recovery. EUR/USD is struggling to keep above 1.2120, from which point it starts to look vulnerable to further pullbacks, whilst EUR/GBP has just dropped below a key support level since the month of May (0.8863) adding further bearish pressure to the European currency.

of clients are net long.


of clients are net short.

This is America’s most popular muscle car