New Zealand Dollar Forecast: Bull Moves May Not Be Done Yet

New Zealand Dollar Down, Not Out

The New Zealand Dollar enjoyed a burst higher at the start of 2021, but trading over the past week or so has yielded some profit taking among the NZD-crosses. A stronger US Dollar has certainly flowed through into a weaker pace of price action for growth-linked currencies like the Kiwi. But the New Zealand Dollar itself has two fundamental factors trending in its direction to keep rates supported: a Reserve Bank of New Zealand that can’t fend off a stronger Kiwi; and a strengthening New Zealand economy.

With respect to the former, the RBNZ finds itself in the same boat as the commodity currency’s brethren central banks, the Reserve Bank of Australia and the Bank of Canada: it lacks the firepower, compared to the Bank of Japan, European Central Bank, or Federal Reserve, to prevent its currency from rising in relative value. When push comes to shove, if the BOJ, ECB, or Fed want weaker currencies relative to the New Zealand Dollar, there is little that the RBNZ can do.

As attention shifts away from US politics and back towards the thematic story of the global recovery from the coronavirus pandemic, the New Zealand Dollar remains well-positioned to benefit. 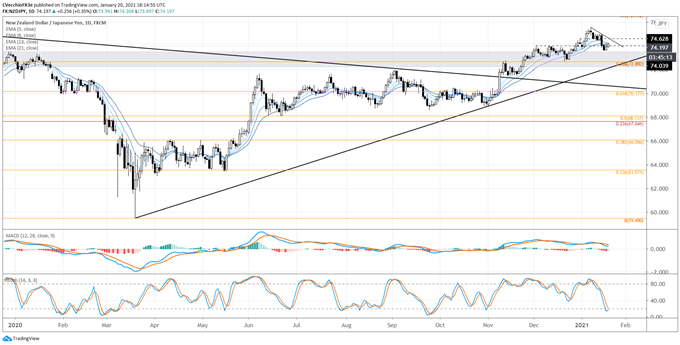 On a longer-term basis, we have articulated a bullish point of view on NZD/JPY rates as a major bottoming process appears to have just started. NZD/JPY rates are still above the descending trendline from the January 2014, July 2017, December 2018, and August 2020 highs. If a long-term bottom is being established, then it remains the case that “we’re looking at a long-term timeframe of ‘buying the dips’ in NZD/JPY rates through at least early-2021.”

On a shorter-term term perspective, NZD/JPY rates are exhibiting signs of a bullish market amid the pullback. While both daily MACD and daily Slow Stochastics are at their lowest levels since early-November 2020, NZD/JPY rates are trading relatively higher, closer to their 2020 closing level near 74.21 than the November low 68.94; NZD/JPY rates were last spotted at 74.19. A break of the intramonth downtrend would signal bullish resumption. 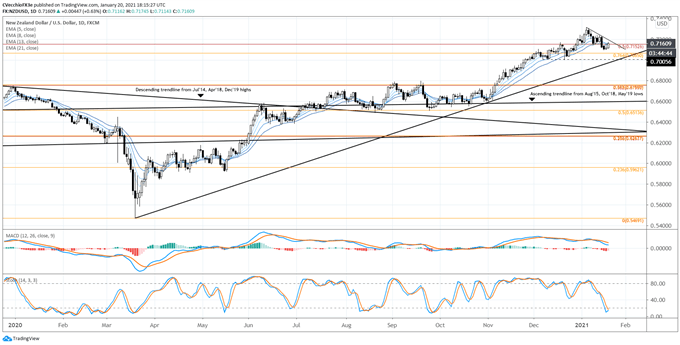 NZD/USD rates are mired in an intramonth downtrend like NZD/JPY rates, but like their counterpart, retain bullish technical posture. Similarly, NZD/USD rates are closer to their 2020 closing level than the early-November 2020 lows despite both daily MACD and Stochastics being at two and half month lows. With favorable monthly seasonality at their back, NZD/USD rates likely have more upside ahead. 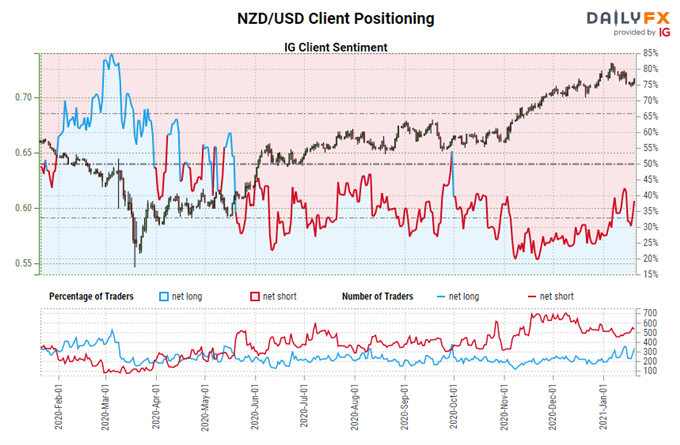 We typically take a contrarian view to crowd sentiment, and the fact traders are net-short suggests NZD/USD prices may continue to rise.

Yet traders are less net-short than yesterday and compared with last week. Recent changes in sentiment warn that the current NZD/USD price trend may soon reverse lower despite the fact traders remain net-short.

BlackRock Give 2 Funds Go-Ahead to Invest in Bitcoin Futures